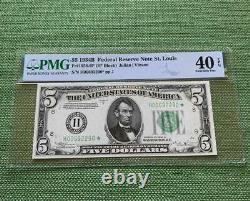 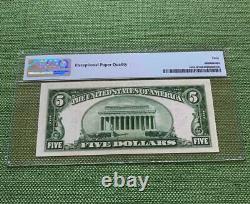 Louis FRN - PMG Extremely Fine XF 40EPQ - C2C. Don't fall for "High Grade, " "Superb Grade, " "Awesome Grade" uncertified notes being offered online. Most of the time, there is a reason why they are not in a third-party grading company holder. It's a multi-million dollar epidemic. Avoid being taken advantage of!

Louis district with sharp edges, square corners, clean paper and excellent eye-appeal. The dark blue-green color on the seal and serials is nice and bold. The Friedberg number is Fr. 1958-H and the treasury signatures are Julian-Vinson. This note has been certified and graded by PMG as Extremely Fine (XF) 40EPQ, which makes it an ideal note for collectors looking to obtain the finest quality material.

Sheets of star notes are printed in advance of a series and inserted into packs where a note (or sheet) from the normal run (non-star) became damaged or otherwise not issuable. They are also known as "replacement" notes. Since the BEP is generally pretty good about not producing damages or errors during the printing process, star notes are not needed that often, therefore, are very rare compared to non-stars. I have heard an estimate of about 1:100 -- for every one star note issued, 100 non-stars of that same series were released.

Do some research on him. He is on a very short list of men who have served in all three (3) branches of the US federal government, but if you look at that list, nearly all of the other guys served in weak sauce positions. Vinson was a Kentucky congressman for over a decade, starting out his career in the Legislative branch, then served in the Executive branch as Secretary of the Treasury only for a short while before being appointed as Chief Justice of the US Supreme Court -- the top position of the Judicial branch. His short tenure as part of Harry S. Truman's cabinet he only signed notes for approx. Early Federal Reserve Notes rock! I love trying to put together district sets (A-1 through L-12) of each series in nice grades, which is a very challenging endeavor.

It makes collecting really fun. If you need any particular districts for your sets, message me and I may have duplicates (I have hundreds of certified FRN's - they are my passion and I believe they are a great long-term value play for investing). The best part of this note's grade is the "EPQ" that was awarded by PMG. For those of you out there just starting out in the hobby, its a great idea to look for original, exceptional paper quality when shopping for notes.

Greedy dealers of today and yester-year have dreamt up a number of ways to "improve" a note's appearance to unsuspecting and untrained eyes in an attempt to maximize profits pressing, chemically treating, etc. The sad thing about this is that such deceitful and unnatural tactics ruin a note's originality forever. But I have a feeling that you won't want to return it once you have it in your hand.

I just received back several hundred notes from PMG and there is a lot of exciting, rare, high-grade stuff in these stacks. Almost my entire collection is decent, quality material. I have worked hard on developing my "eye" for original, problem-free notes over the years and have been cherry picking shops and shows for over a decade.

I will be highly responsive to all inquiries. Get images that make Supersized seem small.

Showcase your items with Auctiva's. The item "TOUGH VINSON STAR 1934B $5 St.

Louis FRN PMG Extremely Fine XF 40EPQ C2C" is in sale since Sunday, November 7, 2021. This item is in the category "Coins & Paper Money\Paper Money\ US\Small Size Notes\Federal Reserve Notes". The seller is "pibbthug" and is located in Los Angeles, California.